Difference between revisions of "Lambda sensor" 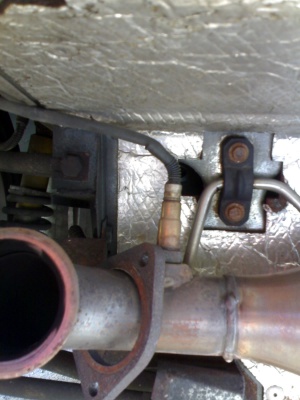 The Lambda Sensor, also known as an Oxygen or O2 sensor, gives a voltage feedback to the ECU indicating the amount of oxygen in the exhaust stream, thus allowing accurate control over the combustion mixture. This is important to minimise emissions, maximise fuel economy and ensure the longevity of the catalytic converter.

On a standard Elise exhaust, it is located on the manifold downpipe, somewhat resembling a spark plug in appearance, screwed into a threaded hole facing the front of the engine. It will (usually) have 4 silicone sheathed wires emerging from it, and may also have an outer heat resistant wrap covering the wires until they have run some distance from the exhaust.

The wires are usually colour coded as follows:

A correctly operating sensor acts as a fuel cell once heated to a minimum of 300°C, producing a voltage by electromechanical means, which typically ranges from around 0.2 volts in the case of a lean mixture to 0.8 volts for a rich mixture. The optimum mixture ratio is reached at around 0.45 volts.

This is commonly considered to be a complete pain, primarily due to the sensor's tendency to 'weld' itself into the screw fitting in the exhaust manifold, making it very difficult to remove. Access is also extremely tight, and it is likely that there will not be sufficient room to faclitate using a specialist oxygen sensor socket.

One suggested solution is to cut the wires to the sensor, allowing a 22mm ring spanner to be used to attempt to remove it.

It is said that Lotus garages have their own special ways and means of removing these sensors, and this can involve removing the exhaust manifold entirely, especially where removing the sensor has led to the sensor mounting thread being stripped and having to be re-cut or helicoiled.

Prices range from around £50 for an after market part without the connector attached to £70 for one with a connector to £150+ for a Lotus branded unit from a main dealer.

Do not be tempted to use a (cheaper) S1 sensor on an S2 and splicing the wires. The S2 ECU will turn on the MIL because the heater element resistance value is different between the two sensor types and the S1 sensor falls outside the allowable range for the S2 ECU.