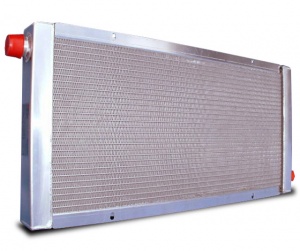 The standard OEM Elise radiator is another weak point in the cooling system. Although it is lightweight, it has plastic end tanks which are prone to expanding and leaking under pressure.

The most common fault with the OEM radiator is cracking of the plastic end tanks. The first signs of failure are drops of coolent on the windscreen, either drivers or passengers side, but castrophic failure of the end tanks has been known.