A V6 engined version of the Exige had been rumored for many years, even back before the introduction of the Evora, but as rumors built through 2011[1], with prototypes being spotted both with modified S2 Exige style bodywork and camouflaged paintwork at the Nurburgring - with camouflaged cars seen lacking the Exiges traditional roof scoop and, in some cases, the rear wing. 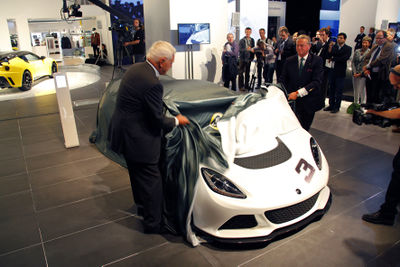 The launch however was only the beginning of the Exige S's protracted path towards customer deliveries.

At the Frankfurt Motor Show initial deliveries were cited for January 2012[3], but the company was unable to provide official performance, weight or emission figures for the car, instead simply giving estimated 0-60mph, 0-100mph and weight figures of 3.8s, 7.9s and 1080kg respectively as the car was still waiting to undergo the type approval process.

After the Frankfurt launch the car was again seen testing at the Nurburgring[4], along with a test car spotted in Holland[5] along with the MY12 Elise S and a dealer preview even at JCT600 in November[6].

A number of dealership demo days were scheduled for December[7], with the blue 'Ride and Handling' prototype set to be driven between dealership, however the cars engine was damaged during filming at the companies Hethel test track with Bruno Senna driving the car. Rumors say that Senna selected the wrong gear on a downshift and over-revved the engine, however Lotus never commented on the cause of the damage.

In its place the non-running Frankfurt show car was trailered between the preview days, however the first 3 events had to be cancelled due to the short notice and distances involved. A gallery of photos from the preview days and first impressions on it can be found on the main SELOC website.

Official performance figures[8] and initial brochures[9] were finally published in January 2012, however the cars 0-100mph and weight figures had increased to 8.5s and 1176kg and customer cars were still nowhere to be seen and delivery dates being pushed out.

In February 2012 Lotus teased a new convertible model at the Geneva motor show, and while many predicted a convertible Evora[10] it was instead the Exige S Roadster[11] which was shown - explaining the spoiler-less Exige seen testing before the cars launch.

Press reviews finally came out on April 25th[12], with the reviews raving about the cars performance, handling and new Race Mode, but some bemoaning the cramped interior dimensions inherent of the Elise chassis. The take-over of Proton by DRB-Hicom[13] however led to a halt in funding, a shutdown of the factory production lines and further delays for deliveries to September 2012[14].

Potential customers for the car finally got a chance to drive it during a series of dealer demo days[15] in May, and you can read about our test drive.

The first line built Exige S came off the production line on July 26th[16], however further checks and quality improvements meant that delays continued, with durability issues being cited as the cause[17]. The first cars to be shipped from the factory appeared to be Exige V6 Cup cars prepared by Lotus Racing and sold to Asia and the US for the Lotus Cup series[18]. On December 11th, 2012 the first European dealer demo cars were delivered to the Frédéric Koninckx Motors and Lotus Verhiest dealerships in Belgium[19], while UK dealer Bell & Colvill collected the first UK dealer demo car from Lotus's Hethel factory on December 14th 2012[20].

The first customer delivery was made on January 4th 2013 to SELOC member Harleston[21] as a customer car that was built early amongst the later batch of UK dealer cars.

The V6 engined Exige retains the same basic chassis that has been used throughout the Elises life, but matches it up with a new rear sub-frame similar in design to that of the Evora with which it shares it's 2GR-FE engine.

Major mechanical changes to previous generation Elise chassis based cars include Evora style cast aluminium lower rear wishbones, larger suspension bushes carried over from the Evora and the addition of a rear anti-roll bar. The front wishbones remain a similar design but with extra strengthening. The steering rack is also replaced by a slightly quicker ratio unit, but despite the weight gain and wider tyres remains non-power-assisted.

Compared the the S2 the Exige V6 has a 70mm longer wheelbase to accommodate the new engine, 25mm wider front track and 38mm wider rear track. The 2012 Exige S was also the first Lotus to see the latest generation Bosch derived Lotus DPM system, which boasts a highly acclaimed Race Mode which actively monitors the grip levels of the rear tyres and works to maximise traction. 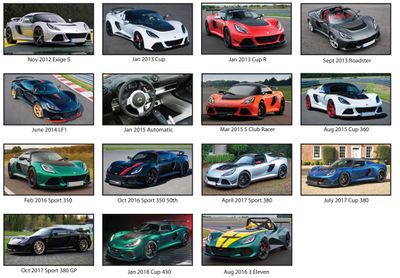 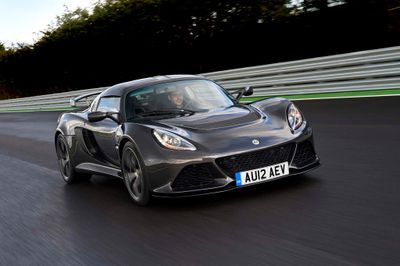 Unveiled at the Canary Wharf Motorexpo on June 9th 2014[22], the Exige LF1 is a Lotus F1 Team inspired special edition of the Exige S Coupe.

The LF1 features a number of unique additions over the standard Exige S model and is limited to just 81 cars – the same as the number of victories in F1 by Lotus teams in their various guises - including details of the victory corresponding to the cars number.

Full specifications for the cars are:

In addition to this the Lotus Exige LF1 special edition comes with the following Formula 1® package within the purchase price of the car: 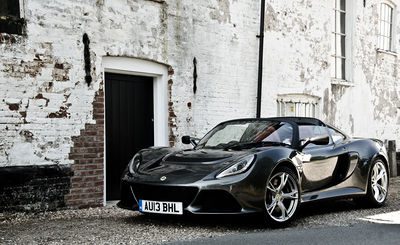 The soft-top version of the Exige S differs from the coupe not only in the different roof, but also lacks the rear spoiler and front splitter of the coupe. Because of this, and to prevent damage to the soft-top, the Roadster is electronically limited to a top speed of 145mph. 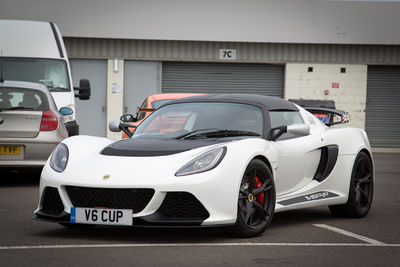 The engine remains as per the Exige S, however the Exige V6 Cup features as standard the follow performance upgrades and safety equipment:

Many of the changes to the Exige V6 Cup are available through the Lotus Racing Exige V6 Performance Parts upgrades for the Exige S. 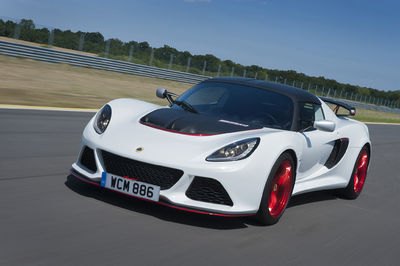 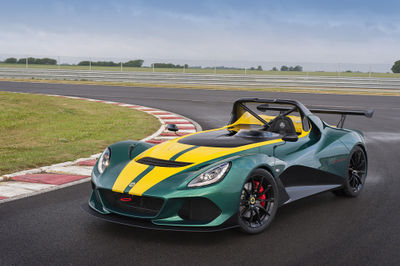 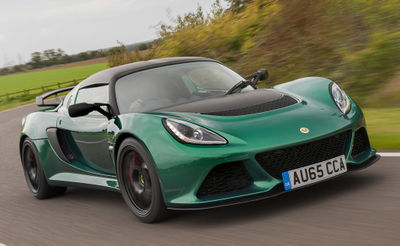 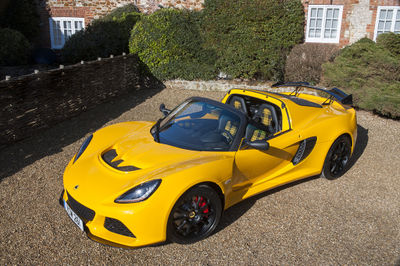 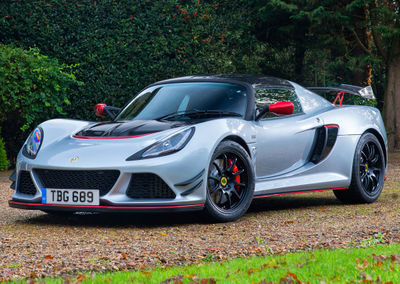 These early test mules were spotted some time before the initial announcement of the Exige S testing both on the road and at the Nurburgring, with sightings as far back as 2009[26].

These cars were sported modified S2 bodywork, including riveted on arches and front bumper extensions to accommodate the cars wider track and front mounted oil and water coolers.

Shown at the Frankfurt launch of the Exige S, the Exige S Show Car was a non-functioning model which had to be wheeled around by hand and which was also used for the initial Dealer Preview Days after the original development car that was planned to be used was damaged. It now resides in the Regents Street Lotus Originals store.

Many details on the car differ somewhat from the finished product - including things like the DPM switch, door pulls and lack of hydraulic lifters on the boot-lid.

The show car was finished in Pearl White with red accent details which were not available as factory orders for the production car, and also features a bespoke version of the Premium Sport Pack interior and the cancelled Carbon Pack.

The Exige S Roadster was first shown at the Geneva Motor Show on 6th March 2012[27].

The show car featured several features not available on the production model however, including a non-standard paint colour of Mansory Blue and a bespoke Mansory interior that featured additional trimming beyond the standard Premium Pack[28], and the aluminium tub visible on the inside painted matt black.

The car was also said to feature the SPS (Serial Precision Shift) hydraulically automated version of the EA60 gearbox as fitted to the Evora GTE, however the show car was non-functional[29]. The SPS option was listed both for the Exige S and Exige S Roadster Specifications when the car was first listed on the Lotus Cars website, but was later removed.

The Exige R-GT was first shown alongside the standard Exige S road car at the Frankfurt Motor Show 2011[30], the Exige R-GT was the first motor sport variant of the new Exige to be shown to the public. The car was shown initially in a paint scheme designed to match the Lotus Talbot Sunbeam rally cars, but was later changed to the black and gold colour scheme.

Designed for tarmac rallying in the FIA R-GT class for GT Production Cars[31] the Exige R-GT features a number of modifications to conform to the class regulations and make it suitable for rallying.

The car failed to receive the necessary homologation in time to compete in the Rally 1000 Miglia in April, but made an appearance at the Goodwood Festival of Speed[35] and ran as the course car at the Belgian Geko Ypres rally[36] before receiving FIA homologation in July 2012[37].

The car made it's first competitive appearance driven by Bernardo Sousa at the Madeira round of the European Rally Championship, but crashed out on the third stage after suffering issues electrical issues which caused a failure with the gear selection[38]. The crash damaged the chassis beyond repair and the car made no more appearances in 2012 - it's unknown if any Exige R-GT's will be campaigned in 2013.

The Exige V6 Cup was first shown at the Lotus Festival in August 2012[39], with full specifications made available ahead of the cars official unveiling at Autosport International 2013[40]. The engine remains the same as in the standard Exige S, bar the addition of a baffled wet-sump, while the unladen vehicle mass is dropped to 1080kg.

The track only version of the Exige V6 Cup is sold in to the US market and is eligible for racing in the Lotus Cup USA series. In December 2012 a lucky group of potential Exige V6 Cup customers, including forum member 'jokke_vlo' were invited up to Hethel to test out the latest developments by Lotus Racing on the companies test track[41].

The revised car features a number of aerodynamic and mechanical changes to help transform the latest Exige from a road and track day weapon in to a full race ready machine.

On the outside the car has sprouted an extended front splitter and larger, adjustable, rear wing, while a slatted rear engine cover, removed inner rear lights and cut out where the number plate normally rests aid cooling.

Under the hood the Toyota sourced 2GR-FE engine sees a small power increase to 366ps due to revised intake, exhaust and mapping, while a sequential, paddle shift gearbox is added to help improve lap times and durability in race conditions.

Exige V6 Cup R cars are hand-built from the chassis up by Lotus Racing, with sills bolted to the chassis as opposed to being production line built with bonded side panels as on the Exige S and regular Exige V6 Cup cars. This helps with the access and repairs often needed on race cars.