This guide relates to the S1 Elise, other cars may differ.

This is a time consuming operation, estimate 3 to 4 hours, its not that difficult but it is aquward.

I reccomend you have some ball ended allen keys (to remove the handbrake assembly if you need to) and a 1/4 inch socket set to get at the bolts under the gear leaver.

New factory throttle cables seem to be longer than the original Lotus ones but there is enough adjustment to take up the slack induced (just). 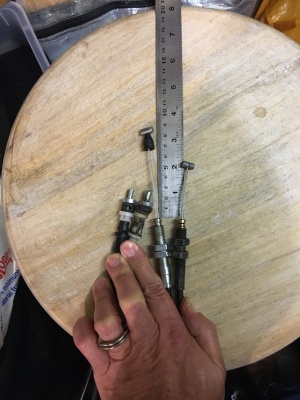 I replaced the plastic push on the linkage plate with a brass one (Sandercock bush) This helps a little but doesn't make that much difference to the pedal feel IMHO, however it does have the advantage that it never needs to be replaced!

I am now on my third throttle cable, despite keeping them lubricated regularly, so I decided (stealing the idea from a SELOC member [citation needed]) to re-route my cable away from the exhaust. I believe (I have no proof) that the heat from the exhaust denatures the plastic liner in the cable and this is what causes the cable to stick.

The route I chose is to to run the cable around the offside end of the engine, inside the large alloy extrusion that the engine attaches to, it then curves down to the sheer plate and continues as before. I relocated the nylon P clip, drilling a small hole in the sheer plate, to stop the cable from rattling on the undertray.

If you decide to use this new route you will need to drill the sheer panel for the P clip and find an M2.5 (I think) nut and washer to fit the P-Clip's bolt.

My original throttle cable passed under the handbrake mechanism, I think this is just an artefact of the order in which the car was assembled. If you want to put it back this way you will have to cut (and later replace) several cable ties, unbolt the handbrake from its brackets to get the cable through. I didn't bother and simply ran the cable alongside the handbrake, on the passenger side. It then passes under the gear change leaver before passing up the footwell divider as before.

New throttle cables are supplied dry and I feel they should be lubricated before use.

I was advised by a supplier of motorbike cables advised me never to use WD40 on cables as it can make the nylon liners swell and grip the cable. I was surprised at this but I just follow his advice - always use "Duck oil" and a Motorcycle cable oiler.

I have always started from the engine end.

Before you start the car get someone to check the cable adjustment with you. There should be a tiny amount of slack in the cable at idle, and with your foot on the floor the throttle should be wide open.

Just to be extra sure (this should not be necessary) do the 5 stamp reset. Turn on the ignition, press fully and release the throttle 5 times, then turn off the ignition and wait until the engine management light goes out.