If you drive a lot of twisty country roads you may have found that the JUMBO sized OEM rear view mirror gets in the way, obscuring a lot of the view out of the windscreen.

A cheap alternative is to fit the mirror from a daewoo matiz (funny wee 3 cylinder shopping trolly, i'd guess most big scrappys would have a few crashed ones. - my local breaker in Glasgow had 5 today. 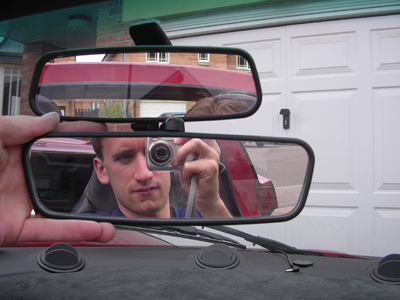 The pic shows the new one in place above and the old one below in comparison. - it doesn't look like an enormous difference in size, but it makes a BIG difference when you're driving the car!

Mine cost me all of £3!!! It works a treat. Much improved visibility, and you retain the lever on the bottom to "dip" the mirror.

It seems the s1 mirror was changed at some stage - my '98 s1 has a small matiz-sized mirror fitted as standard.

The Matiz mirror mount that I picked up from a scrappy was attached with a grub screw similar to the OEM Elise mount. It fits directly onto the 'lozenge' on the S1 windscreen and leaves the mirror around the same position as the OEM mount in its lowest position. If you normally move the OEM mirror to it's highest position you'll find that the Matiz mount leaves it obscuring the view through the windscreen a little, but it's another option you don't want to split the mirror ball/socket.

Addition by Friso: There is some confusion about which kind of mirror is fitted to which cars, I suppose... At least my 2004 S2 111S had a GM mirror with the ball joint on top of the mirror. It is a whopping 260mm wide...

Anyway: I've found a Golf 2 mirror (part no. E1 0010012) to fit quite nicely. This mirror is even smaller than a Deawoo Matiz mirror and, more importantly, it fits on cars that have mirrors which have their ball joint on top.

Or, pop out old mirror (mine came out without any bother), then use sandpaper on the ball of the new VW mirror till you have made the ball small enough to pop in without smashing your windscreen. Only took a few minutes of rubbing to get it to fit. Ohhh la.

Initially, I couldn't get the Golf mirror to fit, even with a bit of WD40. I wasn't keen on sanding the ball down, in case this left it too loose and I was half way back to where I started (i.e. mirror ending up lopsided after 5 minutes drive). I eventually put a towel round the mirror, put the mirror onto a bench, positioned the ball onto the socket and gave the socket mount a sharp hit with hammer. It popped in first time. Obviously, I can't guarantee that this will work again - I did it having reached a point where I figured if it wouldn't go in I was happy to sacrifice a 2nd hand Golf mirror.

Another option is a stick-on mirror from halfords, easy to fit and also quite cheap.

Also try the one available from Mothercare!! Looks neater and ?better vision.