Step 1 Some of you may stumble here because the two screws holding the base plate on can be very tight and unless you are an Ironman which I am not you won't be able to apply enough torque with a normal screwdriver to get the screws undone. I used an AEG torque application device for this step. You can see me removing one of the screws with the AEG on the left hand side.

The base plate was lifted away and positioned where I could work on it. I noticed that there has been a lot of scraping going on where the link has been rubbing on the base plate for the last 48,000 miles.

The black button in the middle of the throttle lever is a "slider button". It is meant to rub on the plate, that's the thin dark rubbed area. When the button wears down, the rest of the lever may start to rub, which is the wider rubbed area in your picture. The button can be replaced and will greatly improve the smoothness of the throttle movement in these cases. DeRoure says £1.03 factory order. Without a good button, there is extra strain on the pivot bushes and nylon washers and the whole lot will start to flex again more quickly than it should.

Step4: I decided to disconnect the throttle cable side first so a Phillips screwdriver on one side and a 7mm socket on the other.

And these are the components that came apart.

I used long nosed pliers to grasp the back of the ball joint and used an 7mm socket to undo the nut. It wasn't a problem because the nut was only nipped up.

See the photograph in step 8 showing the position of the pliers.

Step6: The throttle cable came out easily enough. I just pulled the cable assembly apart to expose the inner core and the cable slid through the slot in the base plate.

6a: The assembly was then free from the car. I noticed the pivot nut was loose. I hadn't touched it and I don't know how long it has been like that.

6b: Dismantling the original linkage from the base plate was easy, no tools needed here for me.

Step7a: The next series of photographs show the new linkage being assembled to the base plate using a combination of new steel washers and an original steel washer for extra clearance. My base plate has a stud, so I didn't need to use the screw that was supplied in the kit. First of all a new M4X12 washer went on.

7b: But after completing this part of the assembly I found the new linkage still rubbed on the base plate so I took it all apart again and added one of the original M5 washers because I did not have another M4X12 washer available.

7c: then the top washer went on.

7d: Followed by the nut. Fortunately I have small fingers and this step could be tricky if you've got Arnold Scharzenegger sized hands.

7e: The nut only needed to be nipped up otherwise I would have snapped the stud or crushed the bearing.

After nipping up the nut I checked to make sure the linkage moved freely. This is when I found that I needed two washers at the bottom, because the linkage still rubbed on the base plate with only one washer.

I also checked to make sure the nut was tightened up correctly so the linkage moved freely but was not loose at the same time.

Step 8 - Then it was time to fit it all back together. Here is the photograph that shows the pliers clamping the ball joint and nipping up the nylock nut. This is what I was referring to back in step 5.

The photograph in step 9f shows the linkage connected in the inner position for the quick throttle option.

9a: The throttle cable assembly went back on.

Step9b: Then it was time to start assembling the throttle cable washer stack. This was the most complicated part of the whole procedure and great care had to be taken to assemble the components in the right order. The washer stack splits into lower, middle and upper sub-assemblies.

9c: I assembled the washer stack making sure to grease the two original nylon washers. This photograph shows the middle layer in position.

9d: Then the top layer of the washer stack went on.

9e: Then I gently nipped the nylock nut up. I had to use an adjustable spanner because I do not possess a 7mm open ended spanner.

9f: All ready for the base plate to be bolted back on.

This photograph has been updated since I originally fitted the linkage.

I have now connected the throttle linkage to the inner hole and it is set up to give the quick throttle option.

For the standard setting (middle hole) I did not have to make any changes to either the throttle stop or at the throttle body end. See the photograph in step 8.

For quick throttle setting (inner hole) I had to adjust the throttle stop by approximately 10mm, but I found that I did not need to make any adjustments at the throttle body end.

Step10a: Yvo supplied two bolts for the base plate and they are a much better idea than the screws.

10b: I just nipped up the bolts and job done. Notice in this photograph the linkage was set to the normal middle position.

Step11: Reconnect the throttle return spring and we are done.

Here are the tools I used plus my trusty AEG. The sockets are 7mm & 8mm.

And here are the parts left over. I fitted one of the original steel washers in step 7 to get extra clearance between the base plate and the throttle linkage.

I checked to make sure that everything moved freely and started the car up. I noticed an instant improvement in the smoothness of the throttle. It's one of the best and cheapest modifications that I have done to my car. 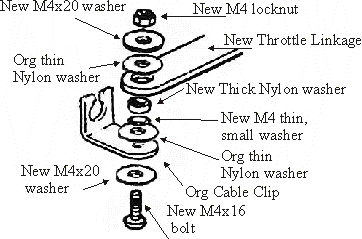 Now.. as you might notice, I've added a small M4 washer in the stack (standard M4 washer). I've done this to prevent any locking action between the thick nylon ring and the throttle linkage. It's not absolutely necessary (if it's moving, it's moving) but it gives just a little more freedom to move, so precautionary action..)